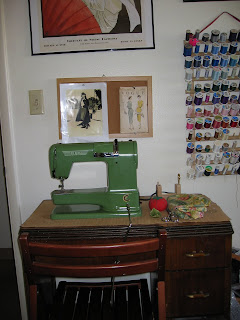 The Elna Supermatic's design is one of those you love or hate.  It has a very confident look about it, for sure.  That color, that greeeeeeeen!  Myself, I love it.  It has very sleek modern styling, especially considering the year it was introduced: 1952.  Later years had slightly different colors, so if this is too much, consider the other which was light green   Later models were beige and not so flashy.

The Supermatic was the next sewing machine made by Tavaro of Switzerland.  The first being the Number 1, of the The Grasshopper.  It has all of the feature of that little one, notably the free arm, and more.  From what I can tell, this model introduced the cam to the home sewing machine market.  They were called "discs" and fit onto the Elnagraph inside the sewing machine itself.  That was how designs were made.  It can do many stitches this way, but what I use most are the stretch and zig zag.  Because it can use those discs, it's hard to imagine this machine being as old as it is.  The advertisements do place it in time, though. 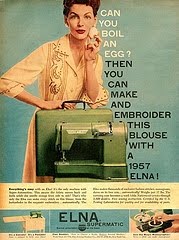 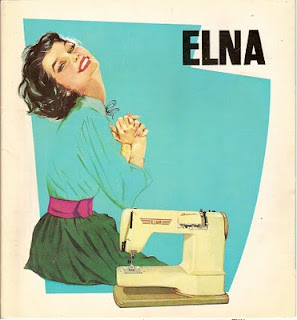 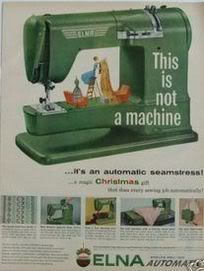 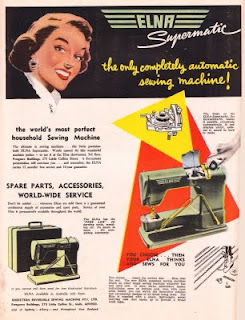 This was a time for buying a sewing machine, no doubt. Lot s of advertisements to introduce Americans to this Swiss company.  The competition must have been fierce.  In my house alone I have several sewing machines made at this time.  So many new families just starting out after the WWII.  The pressure for innovation made for some great results, the Elna Supermatic was a good example of this.

*Low shank.  That means it will take all those fun things like 1/4" foot and walking foot.
*Uses 15x1 Needles
*Uses "Elna" bobbins, available at fabric stores.
* Works best when oiled properly.  Will be noisy of you don't.
*The Supermatic comes with a knee control.
I do not like those, but it does save floor space.  Many people love the knee control, however.  As far as I know, it was not offered with a foot control. Not a big deal.
The only part that was a bit of a mystery to me when I first brought it home was this: How do the discs work?  Do you need them to do zig zag?  There were no discs with my machine when I got it so this was not a problem but lo and behold I found a whole box of them later.  They are a mix, some from a later Elna and some from a Supermatic. To answer the main question in my mind back then: Yes, you do need a disc for zig zag.

That brings me to a similar topic.  You can use presser feet from later Elnas and Cams as well.  They do fit and work fine.

How to use the Discs
I write this as it did cause me some trouble at first.  Maybe this will help someone.
Set the stitch length and width to "0".  The manual says to do this, and that is to make room to set the disc in correctly.  I can't tell you how many tries I made before actually breaking down and reading that very thing, and then it worked perfectly (sigh).

Unscrew the plastic/ bakelite nut on the shaft or Elnagraph.
Place the new disc onto the shaft, matching up the little pin on the vase to your disc's hole.  It will snap into place.  Replace the bakelite nut, it must be on tightly.

Now you can sew as normal.  Like any cam, it takes a little experimentation as to how long a stitch or width you like.  Here is an example.
To remove, bring it back to "0" on both settings. Unscrew the nut and remove the discs.  I use a screwdriver head very gently as my machine does not have it's disc lifter accessory.  You will need something to help.  When it is loose, I use my hands to get it out.
Done!

The Case
The case is so cool, I have to show it.  It is almost as heavy as the machine is, and become a table by folding it origami style.

Problem
The Supermatic has a pretty good reputation but also a flaw many people come up against.  I was one of those people.  If left for a long time, the friction pulley can become flat on the side.  That doesn't stop the machine but will make it very ....and I mean VERY loud.  Like a helicopter.  Thankfully there is a fix for this.  I got a rental tool and a part from White Sewing Center:
Elna Parts
If you are in this predicament, do not give up, try this.  There are many other things for older Elna's there too.

In Summary
There are many sewing machine that are more smooth and quiet.  That said, this beauty is more versatile than most vintage sewing machines.  With the stretch stitch discs it is comparable to most sewing machines made into the 1980's.  It can handle all sorts of modern threads with no problem.  It is not terribly strong, but does very well with garment fabrics from denim to batiste.  Fun to use, simple and not fussy....... and it's green.  What's not to love? 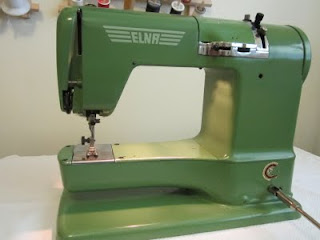 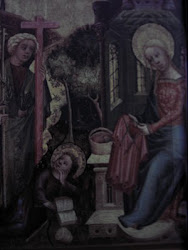 yarndiva
I spend a lot of time with sewing machines. Now it is mostly the old timers but in my work experience there have been many very modern industrials of various types. Love them all. Today I use them to make corsets, clothing, costumes, repair all sorts of things. My home is on the coast of Central California.